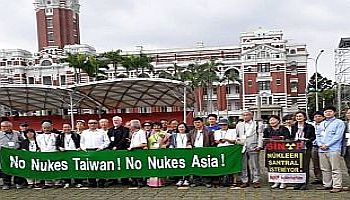 The Nuclear Free Asia Forum, hosted by Taiwan Environmental Protection Organization, was held in Taipei. Turkey also took place in the Forum where it was emphasized that there was a need for a united power between antinuclear groups in Asian countries.

The Nuclear-Free Asia Forum (NNAF), a meeting of scientists, academics and activists from various countries in Asia for 30 years against nuclear energy and nuclear arms, was held this year on September 20-23, 2019 inTaipei, the capital city of Taiwan. Taiwan is a country with four nuclear power plant facilities that each have two reactors. The fourth plant has not yet taken into commission and the government is planning to phase out from nuclear just like Germany, Belgium, Spain and Sweden are planning to exit nuclear power by 2025. 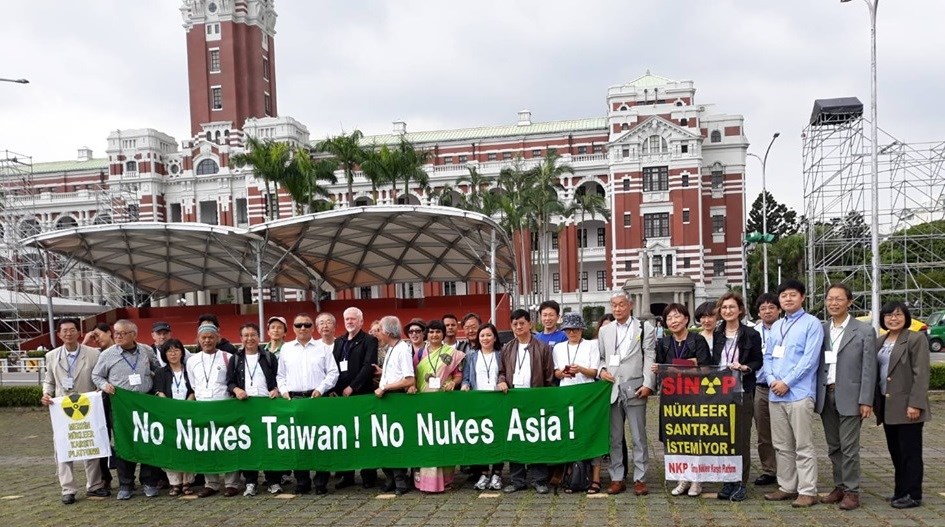 NNAF 2019 delegates are in front of Presidental Hall, Taipei

The starting date of the event was September 20 since it was The anniversary of a major earthquake of 7.7 magnitude in Taiwan that killed 2400 people and injured 11,000 in 1999. A similar  magnitude earthquake same year  caused loss of 30 thousand people due to Marmara and Duzce earthquakes  in Turkey. The importance of learning from the Fukushima Nuclear Disaster and the reality of the earthquake was emphasized at the event whch was hosted by Taiwan Environment Protection Union by using the motto fo “Lets unite our power for a nuclear free Asia”Following the presentations, a visit to the President’s office was held with the delegates. 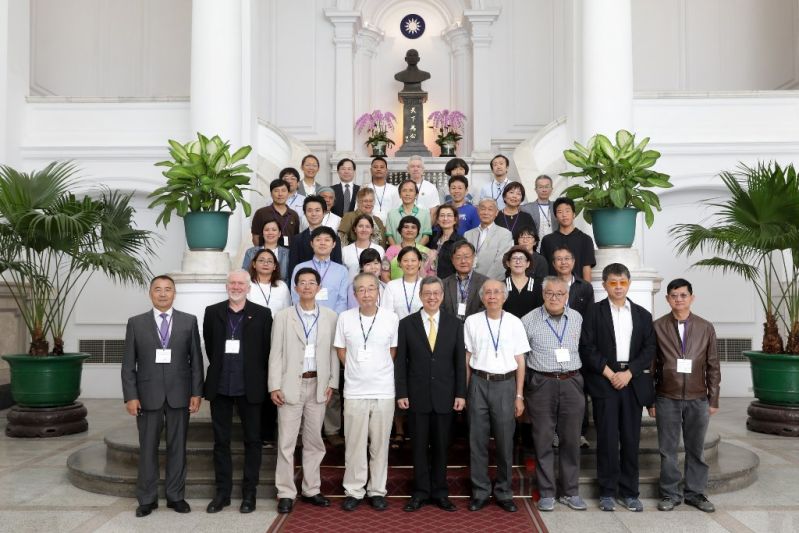 Australian International Campaign to Stop Nuclear Armament (ICAN) which was awarded the Nobel Prize in 2017 was represented by Dawe Sweeney with other delegated from 10 different Asian countries.Pinar Demircan of Yesil Gazete from Turkey took place in NNAF 2019 with other delegates from Australia, China, India, Japan, South Korea Mongolia, the Philippines, Vietnam and the United States .Demircan who is also the coordinator of nukleersiz. org and was invited to the previous forums hosted by Japan and the Philippines shared her impression and said :Having this year’s forum held in Taiwan which has many fault lines it was very meaningful to take the attention to the relation of nuclear disaster and earthquake at a time when our memories belong to Marmara Earthquake was refreshed in Turkey. In fact since Fukushima Nuclear Disaster civil society have been planing to decommissioning of the nuclear power plants which was established in the 1970s during martial law.To realize such plan a referandum will be held in 2020 so that my wish for Taiwan is not to have people’s will be manipulated in the referandum.

Demircan underlined that civil society must face a similar scale of power in the face of global capitalism, which is fed by state and company partnerships, endangering the importance of the Nuclear-Free Asia Forum, the today and tomorrow of the planet. By adding that NNAF has an important mission to strengthen the dialogue of nuclearlessness between culturally comparable societies on the same continent she believes NNAF is a very good opportunity to establish an international dialogue between the countries with similar cultures . She said : “Turkey’s important for both the Asian movement and even a nuclear-free world with the ideal of regional cooperation. Due to its being in the European continent as well as in Asia Turkey can be in a unifying position for the world”. 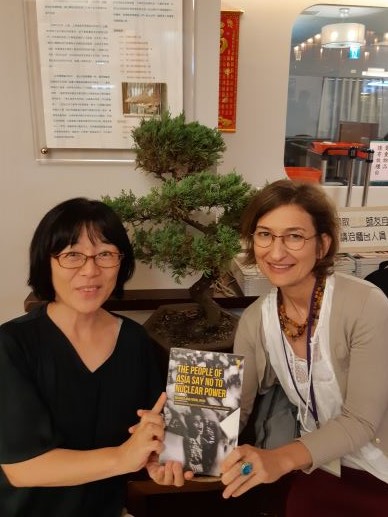 Our writer Pınar Demircan and organizer of Forum Yoko Unoda.

During the event, the participants met with the book of NNAF under the name: The People of Asia, Say No To Nuclear. Demircan who supported content of Turkey section underlined that Asia countries have not only similar cultures abut also historical backgrounds. According to this, she also stated that nuclear power plants were established in Taiwan and Republic of the Philippines during martial law periods so,  such facts indicate that the anti-nuclear energy struggle walks along with the struggle for democracy.

After two days of country presentations and exchanges within the framework of the Nuclear-Free Asia Forum, delegates paid a visit to President Tsai Ing-Wen’s office as part of the program.Vice President Chen Chien Jen, who is Taiwan’s first female President welcomed delegates in Ing-wen’s office and stated that the government’s decision to phasing out nuclear power plants until 2025 and Taiwan’s investments in renewable energy sources has created an appropriate political environment to support Nuclear-Free Asian Forum 2019 and added  that nuclear energy must be abandoned for a secure future.

Dave Sweeney who is a representative of the International Campaign for the Complete Elimination of Nuclear Weapons (ICAN)which received Nobel Prize in 2017, celebrated Taiwan’s decision to phase out from nuclear power and said that it would be great to see Taiwan to start a phasing out from nuclear power in Asia, just like Germany does in Europe. The Vice president agreed by saying that we come from different countries with different languages ​​and cultures, but we had to have a single world. 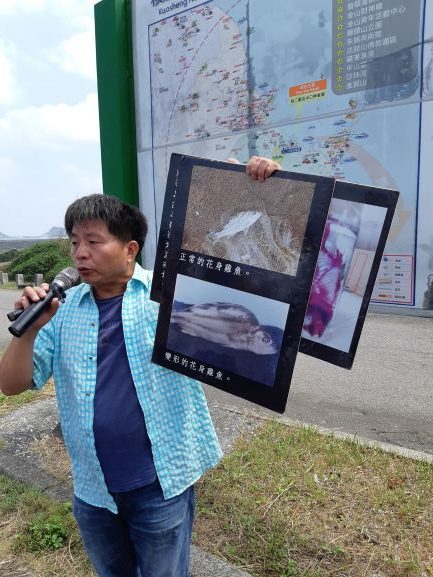 Delegates of the Nuclear-Free Asian Forum adopted the following declaration after the two-day Forum.

Ⅰ. From our long experience and from our discussions in this forum, we have come to the following realizations of the current situation:

Nuclear power is not a wise choice for humanity. It destroys the land and health of this and innumerable future generations. The urgent transition to renewable energy sources is the only credible response to the climate emergency. This transition must be done without causing any harm to Indigenous communities.

Nuclear power is not a clean, safe, affordable or renewable energy source. It cannot be accepted as a response to climate change simply because it has lower carbon emissions than fossil fuels. It must be considered within the life span of nuclear chain. Beginning form uranium mining to nuclear waste processing and storage, including nuclear power plant construction and fuel processing carbon emission steps should be calculated as a whole. Furthermore, it releases radioisotopes and waste heat and generates radioactive wastes.

Nuclear power cannot be an energy solution while it is insoluble with its nuclear waste issue and climate crisis makes it more risky because of uncertain access to cooling water. We can not accept to use our planet’s precious water to cool nuclear power plants while the world itself will be experiencing droughts and disasters.

Nuclear power, nuclear weapons, and chemical weapons are closely entwined; they are a massive threat to the environment and to world peace.

Indigenous and minority peoples, especially those who live in remote areas and who often have little political power or voice – have long been the victims of radiation contamination from mining, nuclear weapons testing, nuclear power plant operation, and nuclear waste disposal – as seen in Australia, Taiwan, China, India, U.S.A., and the South Pacific. The myth of “economic development” cannot morally justify destruction and death for a minority. Expropriation and contamination of their land must be recognized as both cultural and physical genocide, and rectified not just with monetary compensation, but with restoration of their land rights, improving radiation monitoring, access to health services and comprehensive rehabilitation of the land.

Many nuclear reactors are now approaching the end of their operational life. This poses serious challenges, including decommissioning, land cleanup, radiation testing, and management of nuclear waste (including so-called temporary storage), must all be subject to rigorous and ongoing independent monitoring.

Nuclear energy is shrinking in developed countries, while in China, India and other developing countries new plants are being planned and constructed, often under authoritarian governments that readily cover up technical shortcomings. Despite the experience of Fukushima, some countries are planning to restart inactive reactors and revive designs for plants that were shelved. The continued operation of older reactors brings them into a stage of higher risk.

We need energy democracy. This can be built by improving the transparency of media, government and industry; promoting communication in society; allowing sufficient time and place for education and debate on policy. In citizens’ electoral or voting processes, there must be complete disclosure of information, including conflict of interest. 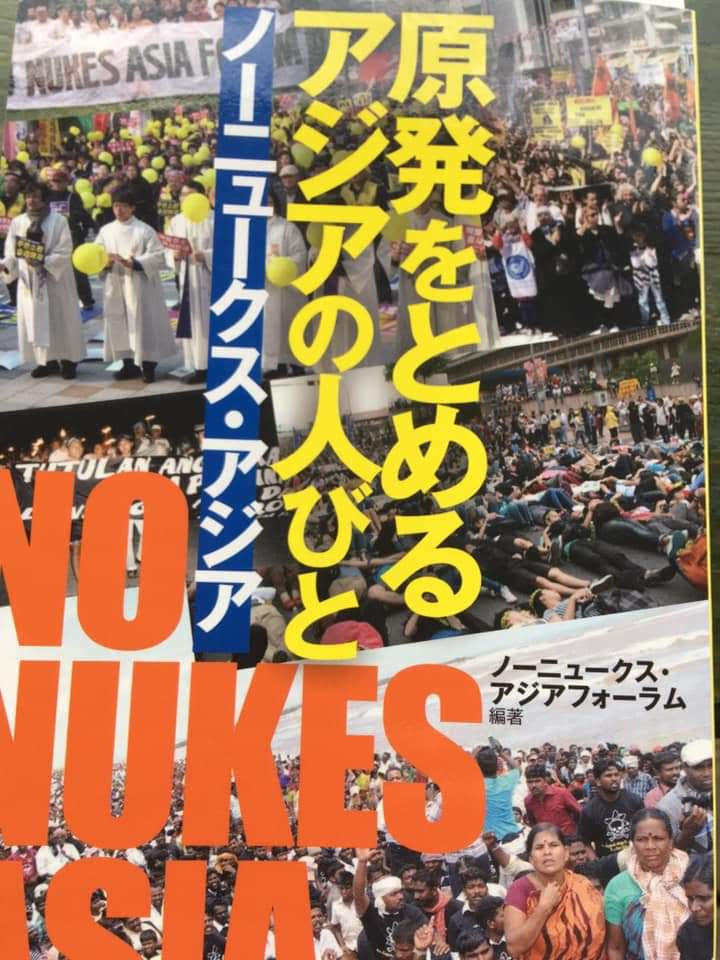 Ⅱ. To meet this situation, we must learn from each other and cooperate with each other, closely share information, and continue joint actions to support the anti-nuclear movements of all countries. The further task is to stimulate citizens and local communities to develop and utilize green renewable energy, with the ultimate goal of a future that is a nuclear-free Asia and nuclear-free earth. Specific actions to be taken at this time are as follows:

Urge all Asian countries to support, sign and ratify the International Treaty on the Prohibition of Nuclear Weapons.Contest the nuclear industry and countries exporting their nuclear plants and technology in order to make a profit from harming the planet and its people.

Urge IAEA to take responsibility to guide and to convince the countries especially which are very well known with their fault lines, such as India, Taiwan and Turkey, to stop their nuclear projects by learning from lessons such as of earthquake and consequences of Fukushima nuclear disaster .

Urge all parties and governments to acknowledge, support and compensate the victims of radiation contamination from uranium mining, radioactive waste dumping and nuclear testing, including those in Australia, India, South Pacific, China, Mongolia, Russia, Taiwan, and Japan.

Urge the people of Taiwan to participate in signing the petition for a referendum on “Abolish Nuclear, Get Renewable”. The uncompleted Nuclear Power Plant No. 4 must be fully dismantled while it is still not radioactive. The site should be transformed to renewable energy generation and/or local needs. For the nuclear power plants that must be decommissioned in the near future, nuclear waste must be dealt with responsibly.

We reject the new ICRP draft on radiological protection. Its revision of reference levels for exposure doses suggests that staying in place after an accident poses a lower radiological risk than evacuating.

We condemn the verdict of the Tokyo District Court, which found three former TEPCO executives not guilty in the criminal lawsuit concerning the Fukushima nuclear accident. We declare our support for the victims of the Fukushima NPP accident.

We acknowledge that 2020 will be a significant year in Japanese nuclear-free politics with the hosting of the summer Olympics and the 75th anniversaries of the Hiroshima and Nagasaki bombings. The true ideals of the Olympic spirit must not be subverted for partisan or propaganda use to distract from the continuing and unresolved human and environmental impacts of the Fukushima crisis. 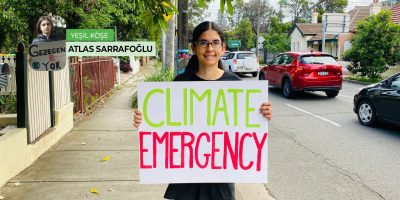 Patsy Islam-Parsons: Air was so thick with smoke that you could literally taste it [Climate Generation-16] 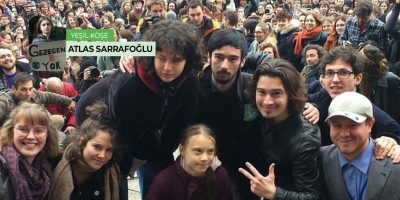 Victor Carnahan: An effect of the climate change is that of complicity [Climate Generation-15] 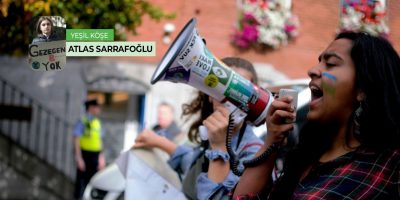 Theresa Rose Sebastian: One day I found myself in the middle of floods in India [Climate Generation-14]