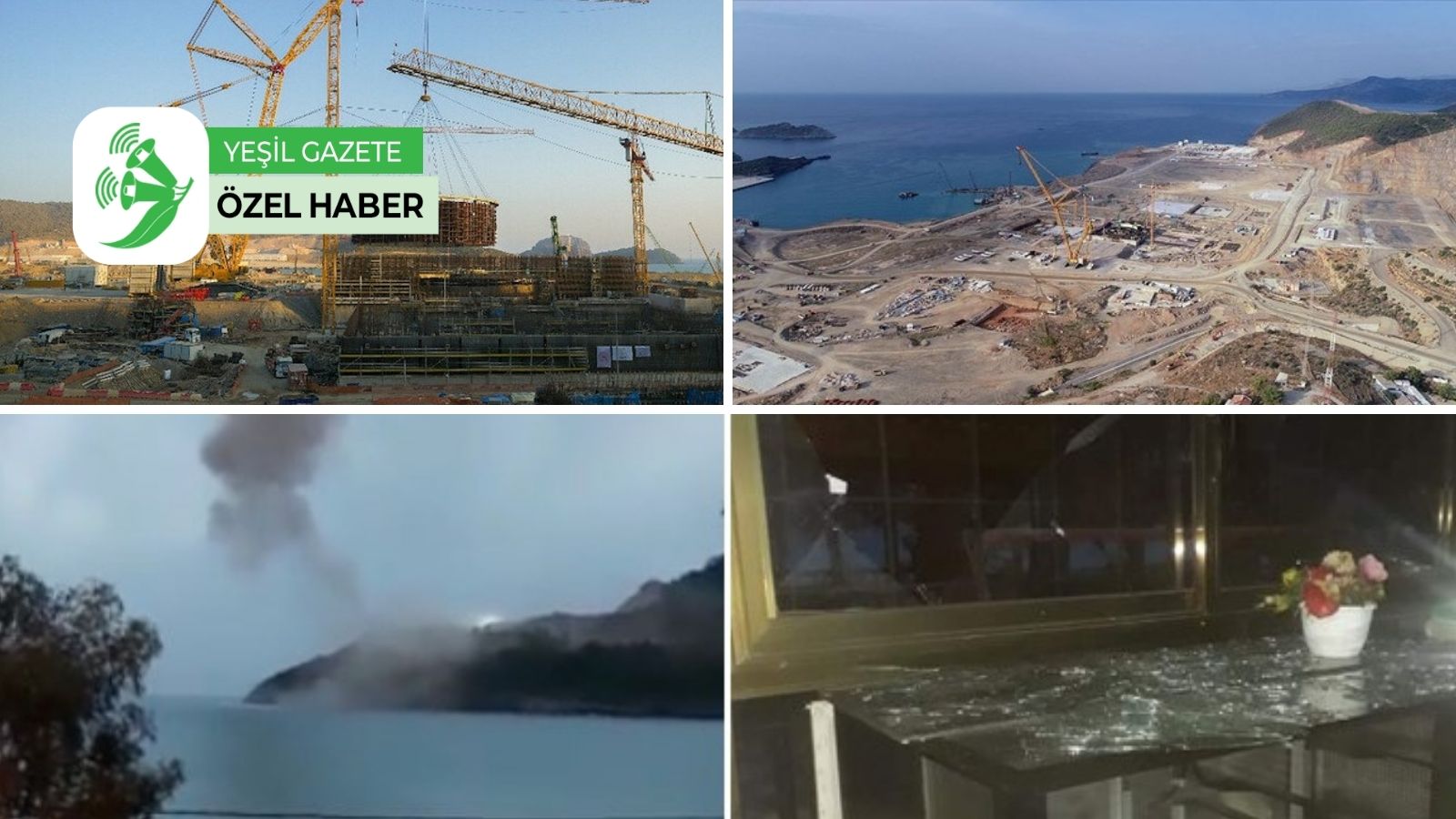 The uncertainty about the explosion that broke the windows of the houses and cars in the surrounding, which took place in the evening of Tuesday, January 19 at the Akkuyu Nuclear Power Plant (NPP)*-which is under construction in the Gulnar district of Mersin- continues.

Although it was said in the statements given by Mersin Governorship and Akkuyu Nuclear Inc. that the explosion was carried out in a planned manner; the details of the incident, whether the explosion had already damaged the ground where the reactors will be placed, the plant construction or had harmed the employees, were not shared.

‘Ways of doing business are the source of security danger’

nukleersiz.org Coordinator Pinar Demircan said the process has not been carried out transparently since the beginning of the project: “In Akkuyu, information is not shared with the public, transparently. In fact, transparency is avoided by putting forward the ‘security’ rationale in general terms in the processes related to nuclear power plants. However, the way of doing business in Akkuyu NPP as of the date of its construction is itself a source of safety hazard.”

Stating that, there were too many unanswered questions about the explosion, Demircan said, “We still do not know who, which subemployer or subcontractor is responsible for the explosion. Again, we learn that cracks have been formed at the base of the reactor constructions and there has been water leakage in the construction area in recent days. It is unacceptable to experience such events and to hide the facts from the public in nuclear facilities that require maximum security.”

The explosion was recorded as a 1.2 magnitude earthquake that took place at 18.02 at the center of Gulnar (Buyukeceli) in the measurements made by the Kandilli Observatory. After the explosion, a citizen who recorded a giant cloud wave from the balcony of her house reacted as “Again, dynamite explosion in Buyukeceli”.

“This time it was huge, incredibly huge. Doors, windows, house shook. I wish you were here and you saw it. And at this time, after 5 o’clock. Unbelievable. When everyone is home,” said a resident of Buyukeceli.

Stating that 86 houses in Buyukceli district were damaged, CHP Mersin Deputy Alpay Antmen said, “The windows, walls and doors of the houses of our people in the region were destroyed. Everywhere is filled with thousands of shards of glass. Our citizens in their summerhouses went out of their homes and rushed to the beach out of fear.”

It was informed that two people were injured due to broken glass, apart from the damage in their houses. The residents of the Tanya Summerhouses complex , where a lot of damage was happened, filed a criminal complaint for the damage they suffered.

Akkuyu NPP: It was a planned explosion

Mersin Governorship stated that the explosion was “made in a planned way” and that the cost of the damage to the surrounding houses will be covered.

The management of Akkuyu NPP stated that the reason of the explosion was “Planned drilling and blasting works were carried out by the subcontractor company that carries out the construction of the Akkuyu Nuclear Power Plant site connection road.”

‘Damages will be covered’

In the statement of the gendarmerie officials and other relevant institutions which is highlighting that they are continuing their research, it is said that  “Compensation for damages of citizens residing in damaged houses are also met. Damage assessment studies carried out by local authorities in the neighborhood continue. After the completion of these studies, compensation will be realized”.

In the statement it was said that, “Akkuyu NPP is in coordination with the subcontractor company, provides all necessary support and assistance to the security forces conducting a detailed investigation into the causes of the incident”.

‘If this is planned, what is unplanned?’

Regarding the explanations that a planned explosion was made, Pinar Demircan stated, if it was expected to cause an effect of 1.2 magnitude earthquake, they should tell us that why people in the region were not warned in advance. Also, the explanations are contradictory she adds:

On the one hand, it is called road construction, then we hear another explanation to the employees as it is for the construction of barracks kind of accommodation facilities. Mersin Anti-Nuclear Platform and non-governmental organizations including various professional associations have a right to ask ‘If this is planned, we want to know what is unplanned?'” 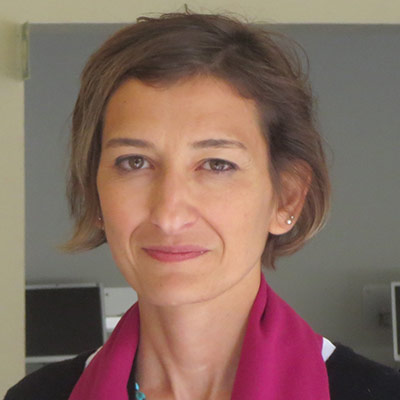 Pointing out the contradictory statements of Akkuyu NPP shows the denial of the accident, she said, “It is obvious that, instead of sharing the truth about the accident, there is an immediate defense. The reason of the explosion also remains unknown because from one side we hear that the explosion was for road construction, on the other side it was for workers’ accomodation place or barracks. Somebody should tell us what is the need of such an explosion for these two simple structures. If we even do not know the real reason, the statements regarding the information given about number of injured people which was explained as 2 people, naturally turns into a question mark.”

‘This is not the only case’

Reminding that the explosion was not the first incident in Akkuyu NPP, Demircan said, “One year after the news of two cracks that occurred on the basis of the construction in 1 year intervals during summer of 2019, water leakage was detected in the construction area “which is actually proof that the ground is not suitable for massive nuclear construction,” she said.

“There are two possibilities here. The feasibility studies of the project were not done properly or it was done properly, but the facts were hidden they think they can hide the truth, but the water leak shows that the truth will unearth by the effort of nature and we as environmentalists”.

‘It was obvious from the abolition of the law’

Demircan stated that they know there are serious dangers related to the nuclear facility area and the ground where the construction is carried out, is already unsuitable because it shows karstic properties:

“Experts, scientists explained these to the consultants by the investigations made within the scope of the lawsuits filed by 13 non-governmental organizations, and we also wrote about it. But the law was acquitted, all cases were rejected. These days were prepared in the days when those cases were dismissed.”

‘They are also unfair towards their employees’

Demircan also stated that the problems experienced in the project are not specific to construction works, “During the pandemic period of Akkuyu NGS, we have all witnessed and still do so that Akkuyu NPP was unfair and never took enough precautions for its workers. Every day we face a new scandal, we hear that employees are forced to take the crowded services buses and eat in cafeterias physically one after the other.”

Demircan stated that the working environment in Akkuyu NGS gives images of “labor camp”.During the pandemic process, the working population continued working as planned before pandemic to reach the deadline of 29 October 2023 which will be the 100th anniversary of Turkish Republic and added that workers were forced to live in even unhygenic conditions and staying at prefab houses without infrastructure.

Demircan reminded that, the sewage wastes in the barracks are also directly discharged to the stream water without any treatment system and the pollution reaches the sea in addition the rising worker population also disturbs the villagers in Buyukeceli Village (see more) and said ” When costs are avoided, environmental pollution is ignored, worker health and occupational safety are not observed, there will be a disaster”.

‘Even those who support nuclear energy should oppose’

“Reminding that the society who was not warned about accidents and problems of this construction phase had also not been included in the decision making processes during the project phase, and emphasized that the future events should worry everyone.

However, what we have experienced in Akkuyu NPP project since 2010; The economic, social and political realities of this country are so dire that even those who support nuclear energy should oppose this project. On the one hand, we must continue to demand information on the processes, and on the other hand, we must demand the attention of the international public opinion with its institutions and organizations,” she said.

*Akkuyu Nuclear Power Plant was started through an Intergovernmental agreement signed between Russia and Turkey in 2010. Built-Own-Operate (BOO) model was agreed for the construction of reactors. Under this scheme, the estimated cost of the Akkuyu project is 22 billion dollars for four reactors of the VVER1200 design, and electricity produced by Akkuyu will be bought at a guaranteed price of 12,35 Dollarcent per kWh for 15 years. 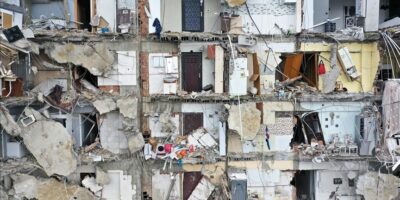 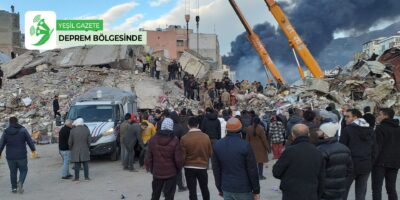