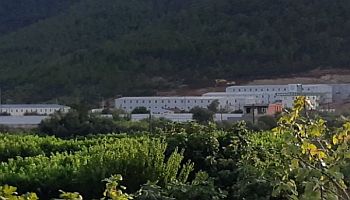 160 kilometers away from the city center of Mersin, olive, pomegranate, lemon orchards, around the creek can be walked by drawing a U shape at beautiful and small Büyükeceli village where the proposed Akkuyu Nuclear Power Plant is just at 2 kilometer distance.Since 1976 when the site licence for Akkuyu Nuclear Power Plant (NPP) was granted two thirds of the population has migrated to other districts and cities untill today. However, following the beginning of the construction of the first reactor building of the Akkuyu Npp, the village’s population has increased five fold in the last four months, apparently due to subcontracted companies  bringing in their workers. 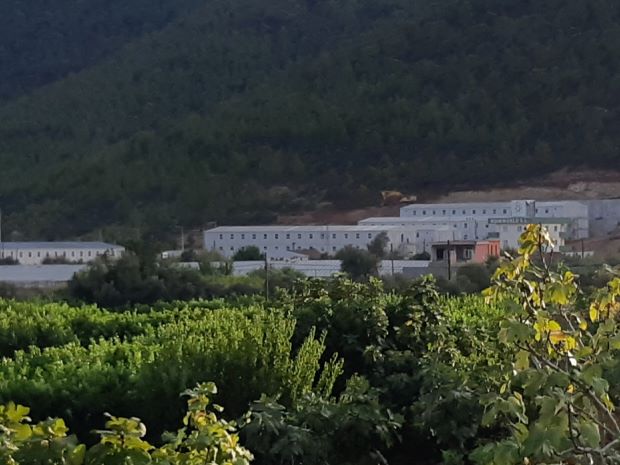 The employees are sheltered in the  housing complex under construction with 5-8 people, Russian personnel stay in the houses rented in Erdemli and Silifke which are almost at 1 hour distance from the plant. Transportation of Russian personnel is provided by 60 service vehicles during the day. We watch the newcomers getting off from the buses that stop almost every five minutes while we are drinking our tea and trying to hear each other under the noise of service vehicles, delivery trucks in the entrance of Buyukeceli village.

After the fire which resulted in the burning of 250 hectares forest land  in 2015, the population was set to 1141 in the village. Despite low population the men of the village are still unemloyed and playing cards at the tea house all the day. Infact only 100 of the villagers are employed at the nuclear power plant site . Such situation is a dissappointment for those who dreamed about being employed at the Nuclear Power Plant. On the other hand villagers meet with the new culture brought by employees from other cities . The change in the structure of the population is also changing the daily life in the village. Due to the increasing population of workers of Akkuyu NPP construction and infrastructure related problems, social problems and environmental pollution has made life in the village difficult.  As a result of this the villagers are concerned about the future of their village.

Delivery trucks are just across where we are

There is no sewer infrastructure, drain flows directly into the waterstream then, to the Mediterranean Sea!

The pollution is important in the village is important since such situations may cause illnesses . The villagers are upset by the smell of sewage from the creek passing through the village. Workers in the construction of the power plant are housed in camps in two separate areas. One below the river and the other is above the river. We understand that this river stream is used as a sewage infrastructure and that the septic tank of both camps are left to flow into the Mediterranean Sea . Apparently Akkuyu NPP pollutes the Mediterranean Sea even before it is established!

Besides the tap water, the local people stopped using stream water with which they used to irrigate their garden. They are frustrated by the smell of sewage and are worried that pollution will cause diseases. When the villagers carried the problem to Gulnar Municipality, they received the answer that the waste was clean and would not pose any problem for human health. Another issue that especially upsets the women of the village is the explosion of millions of tons of dust from the dynamites exploded in the Akkuyu NPP area. They complain  saying” We can not hang our laundry to dry outside the house anymore”

To work at the “Atom Power Plant of Erdogan”

Pollution is not the only problem in the village. For almost 4000 people who are working at the construction site and stay at the downside and upperside camps, the village offers the road to reach the upper camp and the only socialization opportunity for all workers at the site. Since the first reactor and the other reactors are planned to be taken into commission in 2023,  the construction process is carried out in two shifts and hundreds of people pass through Buyukeceli during ahift changes and turns. In addition to the noise made by workers due to drinking alcohol in the evening, the villagers tell that they were also disturbed by their inappropriate behaviors. When they want them to account for their actions , workers reply back them as if  they feel emotionally empowered by working at Erdoğan’s Atomic Power Plant.

Harassment of women in the village…

This “field of power”also fullfills the desires of the workers and make the most negative impact on the women of the village. Women of the village say that this situation is the trigger of many cases such as harassment against women in the village where mostly elderly people remained due to the increasing migrations due to Akkuyu NPP  over the years. Villagers explain that due to working at the “Atomic power plant”workers see themselves as superior and  look down on the villagers as if their lives  are just small details. According to what women tell me, watching the women while they are cleaning the front of their houses; drinking alcohol on the roof of the villagers house, or even lying behind the woman lying on the roof of her own house, are some of the cases that villagers are complaining. For example, born and raised in Buyukeceli Village Ahmet, 88 said he didn’t want to send his wife to the grocery store. His wife nodded and said that they could not even walk with their friends in the village like they used to, they say they’re shut in the house since they do not want to be harassed by workers. 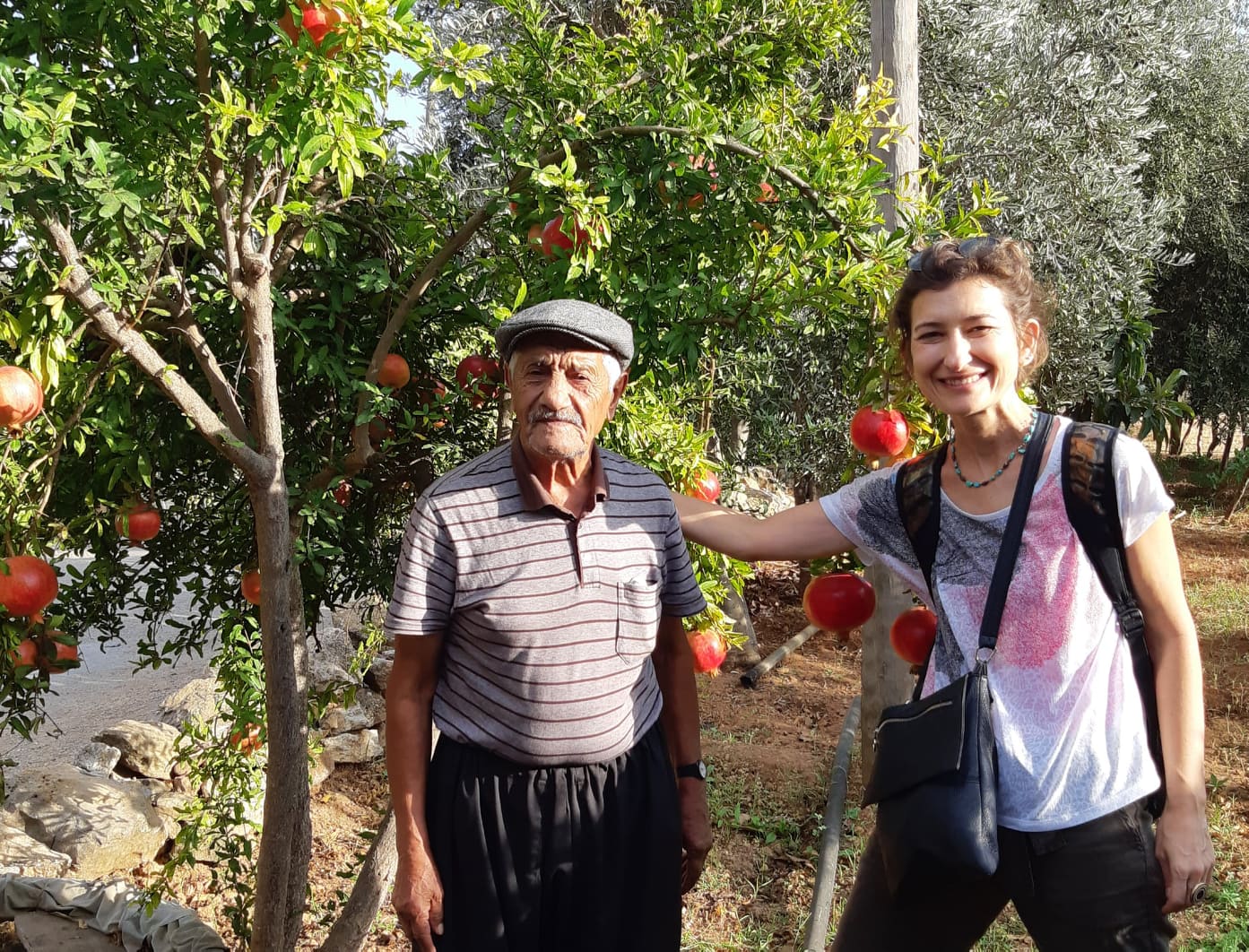 Ahmet has a beautiful village house and a garden where he grows his livelihood with pomegranate, lemon and apple trees. Ahmet, who suffers from the plundering of his garden by saying this is “right to the eye” .Because he can not protect his garden if he can sell his house he wants to settle in Bodrum in Aegean Region where his four daughters had moved. When I asked him whether he had a message from Büyükeceli to our readers his last words to me were “We know that we are in trouble and there is nobody to save us my child”.

Another problem in the village is theft. Serdar Sarı, who has been serving as the mukhtar of Büyükeceli for 6 years, explains that they do not feel safe due to the thefts that occur in addition to harassment. He said that he hadn’t even needed to lock his doors before, but they had been without peace for the last four months and had to live cautiously after two cell phones were stolen. Workers who are free to enter almost everywhere in the village also disturbed the imam of the Mosque since they stay and lay down in the mosque. The only places that are not disturbed by the sudden and problematic increase of the worker population in the village are the shops of the village due to the good sale of drinks and cigarettes .

4000 pairs “right of the eye”! (Right of the eye is used to express the inevitable desire to eat one little fruit when seen in someones’s garden you may be passing by)

The Ruinworld, instead of Roinworld !

Undoubtedly, these experiences are not related to workers’ being good in behaviour or character but related to the fact that the infrastructure services in the camps where the workers stay are not able to provide decent living conditions for them, moreover this company is not able to meet their psychological and social needs. Checking the web site of Roinworld Company I noticed that it was assigned to establish the camp and order their life but it seems that they are unaware that the people in the camp are human beings. The name of the camp should better be changed to Ruinworld! According to the information written on the website, this housing facility’s orgin is Spanish and was founded in 2007 and have been supporting the projects in the countries Spain, Russia, Bangladesh and Turkey. It is clear that all its projects are on sites that belong to Rosatom. Moreover, when the employment option is clicked on the website, the page automatically switches from English to Russian. The website gives an error message when trying to get more information by pressing the English button and there is almost no information in Turkish. 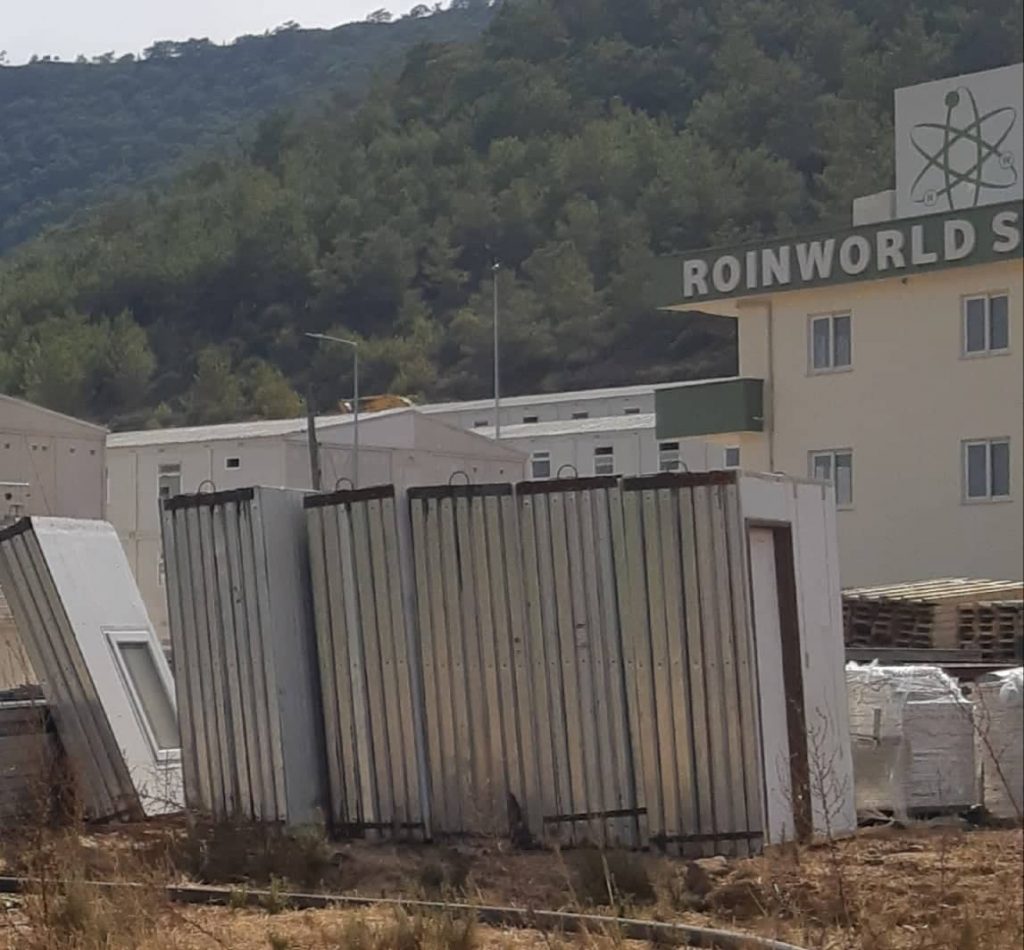 It is clear that the company, which acts as if it is Spanish by making use of the globalized world causes social and psychological problems on workers. Infact this irresponsible facility is again a Rosatom establishment. Apparently the company does not provide a decent life for the workers of Akkuyu NPP construction and the only way to relax is with alcohol just like workers do enjoy and relax with vodka in Russia. However, we would like to remind Rosatom and the government who let Rosatom act freely that unlike Russia’s tundra, in Turkey maquis vegetation is dominant which means average temperature is at least 25-30 degrees in the summer and 20 degrees in the winter. If Rosatom continues to disregard the local climatic and cultural characteristics of Akkuyu, world’s first alcohol-induced shock reactor accident will happen in Turkey.

Such cases having happened in Buyukeceli Village due to Akkuyu NPP construction shows how workers of nuclear power plants that require the top level safety infrastructure are treated under military conditions. Since there are news that Rosatom is also interested in Sinop Nuclear Power Plant project after Japan’s abandonment of the project, it can be hoped that these events will be an example for any villagers of Abali who may be dreaming of working at the nuclear power plant . The villagers should be able to see that their work and overseas promises will not be kept and they should protect their villages, land, air and water. To realize this,  they should show solidarity with antinuclear groups in Sinop as well as in all over the country who are trying to avoid nuclear disaster.

Certainly, I did not tell what happened in Buyukeceli just to set an example for Sinop and other potential projects. In Turkey, the antinuclear movement in Mersin and in all over Turkey which has been fighting against Akkuyu NPP Project must find a way to stop progress of work at Akkuyu site in the national and international level in order to avoid the possibility of irreversible dark future. This is also because it has emerged that the crack in Akkuyu, which we heard about months ago is apparently much deeper than we thought and it causes danger even before the plant is established. 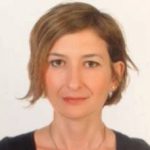 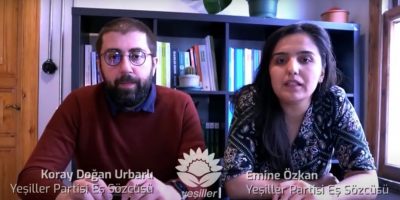 Ministry of Interior obstacle to the establishment of the Green Party 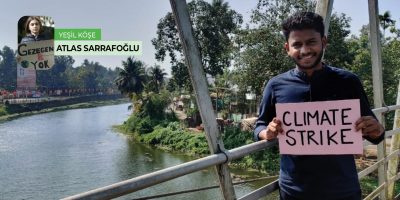 Aditya Sahadevan: I convert my eco-anxiety into eco-activism through my writing [Climate Generation-20]

Maya Özbayoğlu: Activism is the most powerful tool [Climate Generation-18]

Alija Madjovic: Serbia and the Balkans are not colonies where polluters will fulfill their dreams [Climate Generation-18]