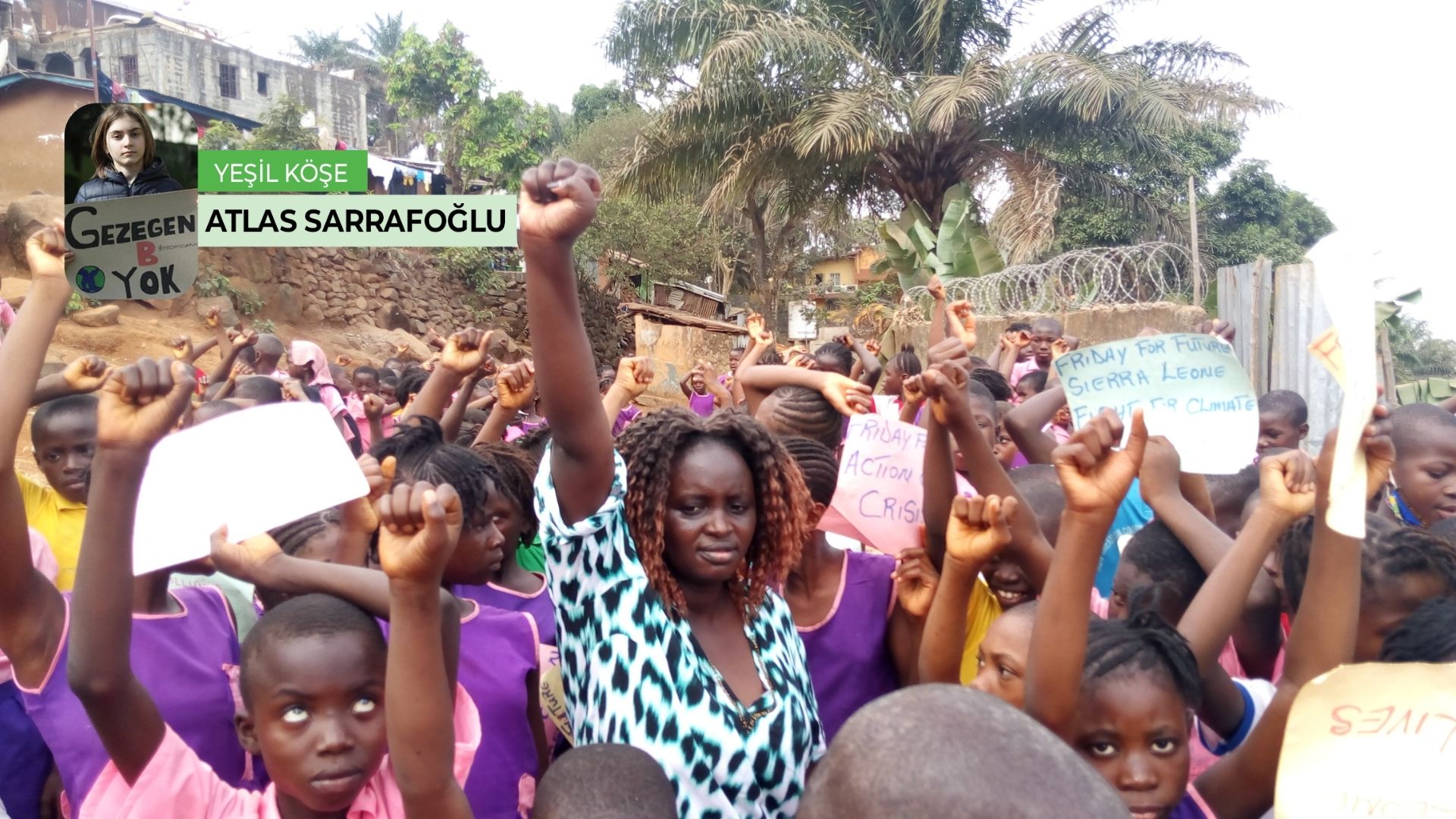 Roseline Isata Mansaray is a climate and environmental activist from Sierra Leone. She is the founder of Fridays For Future Sierra Leone, a growing youth space where young people come together to raise attention to the climate crisis, influence policy and take action in their communities.

She holds a bachelor’s degree in Business Administration at Kampala International University in Uganda. She took classes on climate change and youth participation at the Young Africa Leaders Initiative.

She is very passionate about the environment and wishes to see a point in which the communities are resilient and ready to confront with the effects of the climate crisis.  Her favorite quote is: “The world will not be destroyed by those who do evil, but by those who watch them without doing anything.”

‘Climate change is the daily reality’

Atlas: I imagine you have lived through the consequences of the climate crisis for a long time since Sierra Leone is ranked among the most vulnerable to climate change but please tell us how you became a climate activist and founded FFF Sierra Leone?

Climate change is the daily reality for us because of the floods, landslides, drought, temperature rise etc. It affects everybody but, as a young woman in Africa I am more open to its dangers. Also, in Sierra Leone climate crisis is one of the biggest problems. Therefore, we all must play part in the solution. That is why I decided to strike.

I am not a stranger to the climate crisis. I have tasted the bitterness of climate change. I once lived in a community called Kroo Bay Freetown Sierra Leone. Every time I try to narrate this experience, I cannot hold my tears. 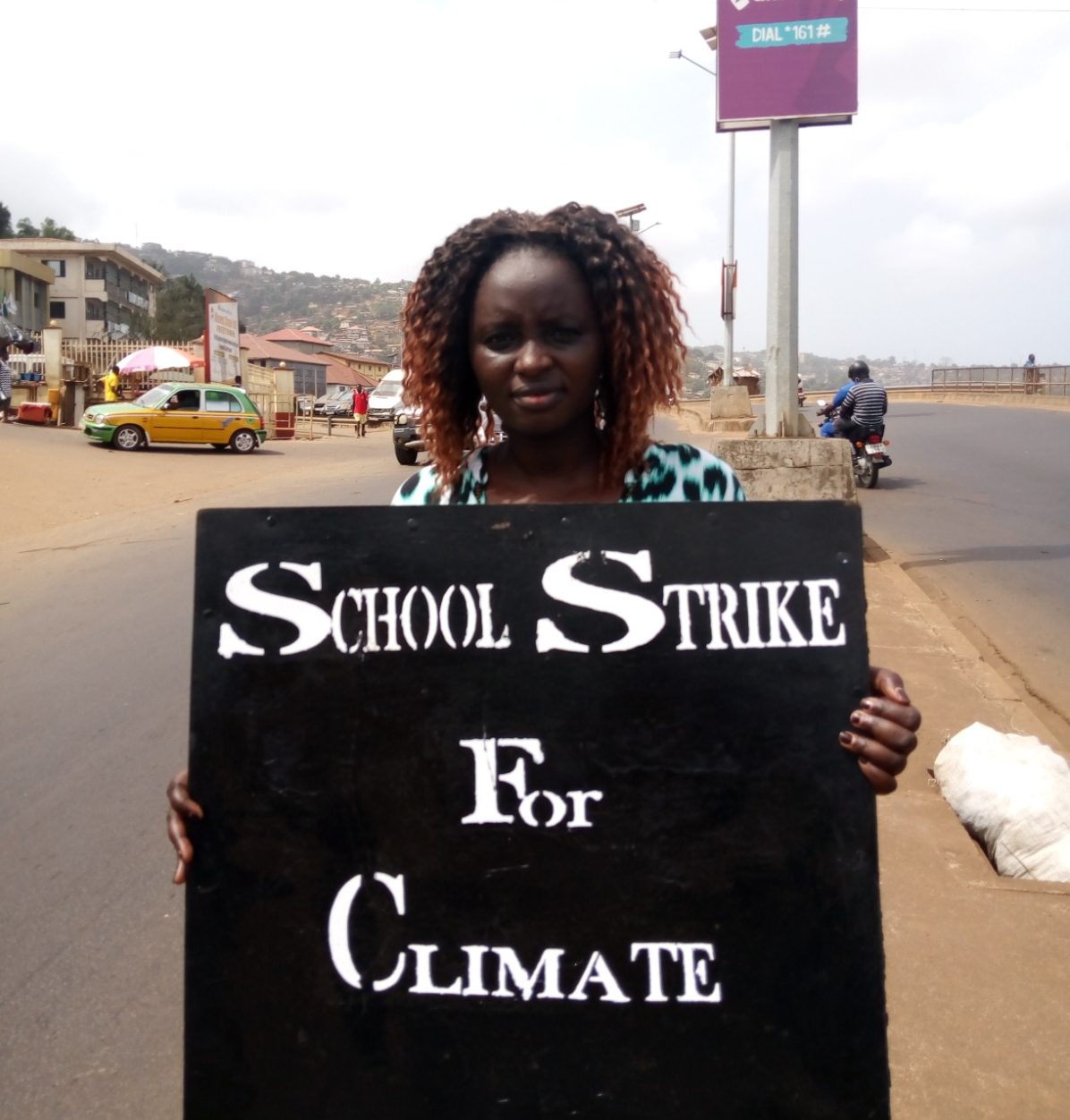 ‘This is why I am striking’

This place Kroo Bay is located near to the sea, where the entire community dump their garbage’s when it rains over the years due to malfunctioning of drainage’s it led to heavy flooding. When these floods occurred, a lot of people lost properties and business, finances, some died, some got injured, both young and old people were carried away by water, a lot of girls got involved in prostitution because there is no roof over their head.

This is why I am striking: to raise attention and awareness towards climate crisis and its consequences. With all the experience and trauma, I got in the hands of climate disasters. I got more inspired by the young Swedish climate activist Greta Thunberg. She added a strong pillar to my activism I raise up and speak up for climate change and environmental pollutions.

How has climate change affected your country in the last few years? Would you tell os why Sierra Leone is ranked among the most vulnerable countries to climate change?

My country Sierra Leone is ranked as one of the world’s most vulnerable countries to the effects of climate change. And it is all too obvious that we are increasingly experiencing adverse impacts of climate change in almost all sectors. This poses a huge challenge to our development changes in weather patterns.

In the Pacific Ocean and the North Atlantic continue to unleash devastating floods all too often in the years 2015 and 2017. My country Sierra Leone was hit by unprecedented floods and heavy mudslides which lead to mass destruction of life, properties and finance in our capital city, Freetown as well as in other major cities in the southern and eastern regions. Thousands of people were displaced including women and children.

Also, many household farms and businesses were destroyed and several people lost their lives. This dim reality poses a huge threat to our development. The potentials for deadly flooding in Sierra Leone was exacerbated by a combination of factors.

Freetown which sit at the tip of a peninsula was in 2015 occupied by approximately 1 million people. Freetown’s topography alternates between thickly wooded and partially deforested mountains. These mountains run along the peninsula parallel to the Atlantic for 25 miles Freetown elevation varies from coastal areas which are at or just below sea level to approximately 400 meters (1300ft) above sea level. 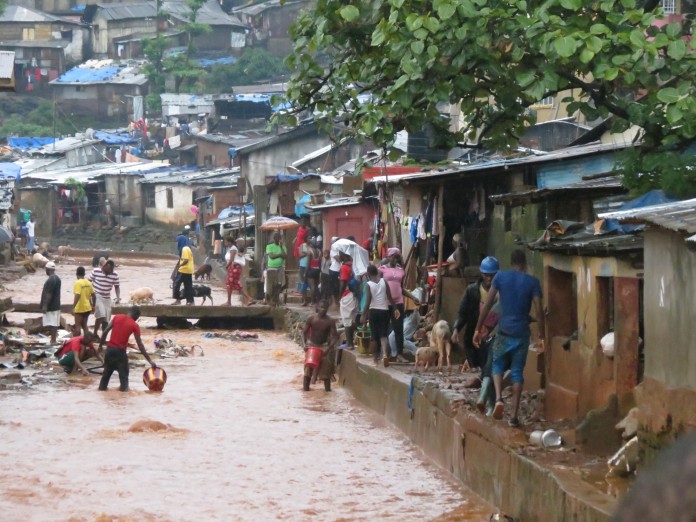 Freetown suffers from long term issues involving poor urban development programs. According to Jamie Hitchens of the Africa Research institutes the government is failing to provide housing for the poorest in the society and when attention is paid to such issues such as unregulated construction, it is received only after a crisis. Because a moratorium on housing construction was not enforced, unorganized settlements. And municipal works encroached on the flood plains, resulting in narrower water passage ways.

During floods Freetown’s drainage systems are often blocked by discarded waste especially in the city’s poorer communities contributing to higher levels of surface runoff. The construction of large homes in the hillside areas and unrestricted deforestation for residential purposes, weakened the stability of nearby slopes and caused soil erosion.

Within a decade leading up to the disaster, Sierra Leone cleared approximately 800,000 hectares of forest cover the country’s civil war, fought between 1991 and 2002 was also a cause of deforestation loss and damage from climate change has pushed sierra Leone far beyond our ability to adapt over the years residents of the capital Freetown have witnessed firsthand the escalating trail of destruction left in the wake of floods and more my country sierra Leone lies in the southwestern part of west Africa . The land is beautiful, with breathtaking mountain ranges deep valleys and low-lying coastal area.

We have always experienced high temperature/heavy rainfall and high humidity. And we use to have two marked seasons: rainy and dry. Now more frequent and prolonged marked dry spells have severely distrusted the farming calendar. When the rains do come, they are sometimes torrential floods became more severe due to the rising sea level along the coast seeing houses destroyed, street flooded and crops damage has become part of our every day.

The floods also contaminate drinking water and lead to the spread of water-borne diseases including cholera, diarrhea and typhoid. The social economic progress made after the end of civil war in 2002 was undermined by the Ebola outbreak and a construction of mining activities, leaving the country in a weakened position to address the impact of climate change. These are reasons we ranked the 3rd most vulnerable country to climate change. 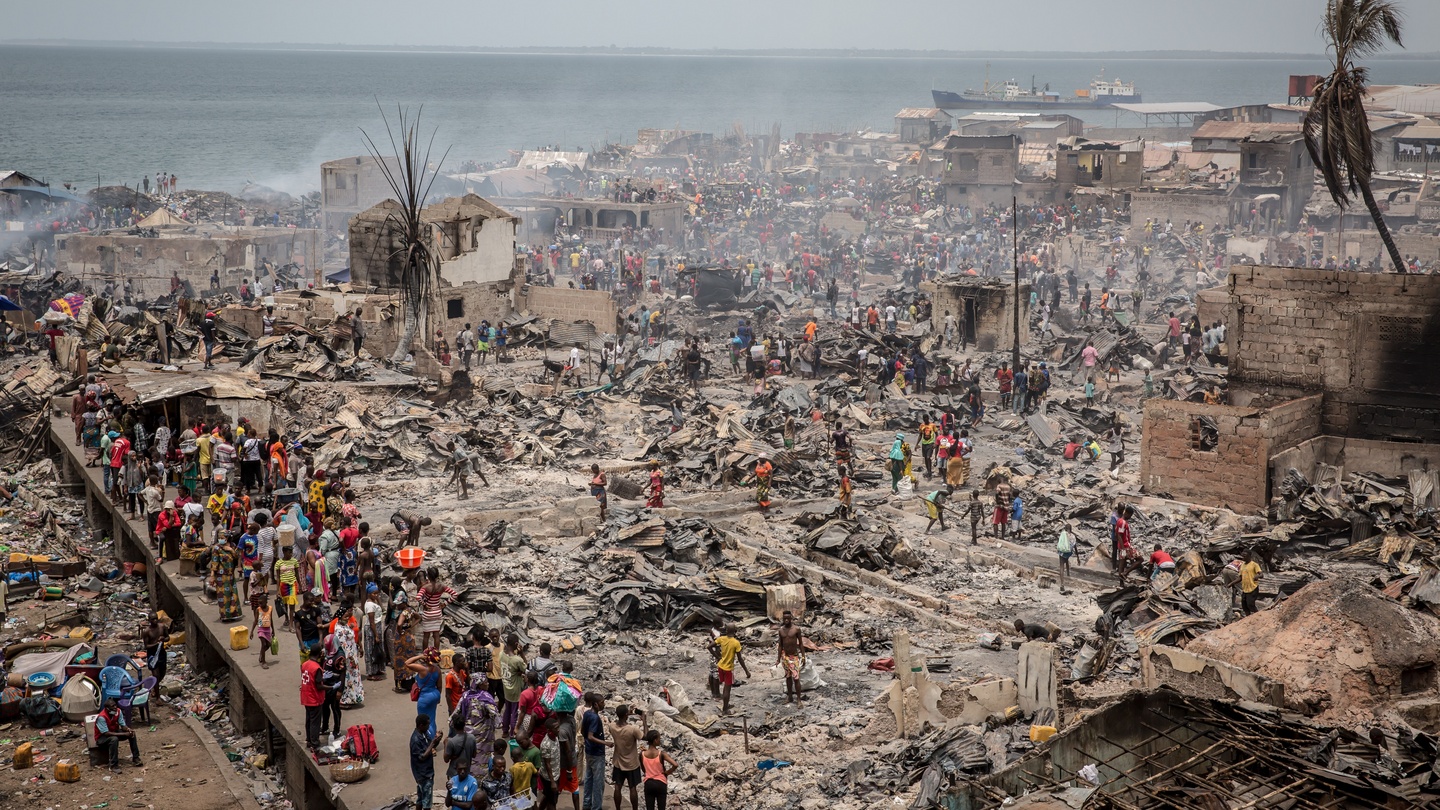 ‘The government must declare climate emergency’

What are your demands from your government?

The government of Sierra Leone must declare a climate emergency.
The national school curriculum should be reformed to address the climate crisis and prioritize protection of the planet. This will bring creativity and innovation for our young people.

The government of Sierra Leone must follow international set agreements and unite behind the science. Corporations must step up to take action to incorporate sustainable ways of doing business in Sierra Leone. Individuals must consider a lifestyle change and practice green actions like cleaning trash in their communities, mass tree planting and cleaning beaches. 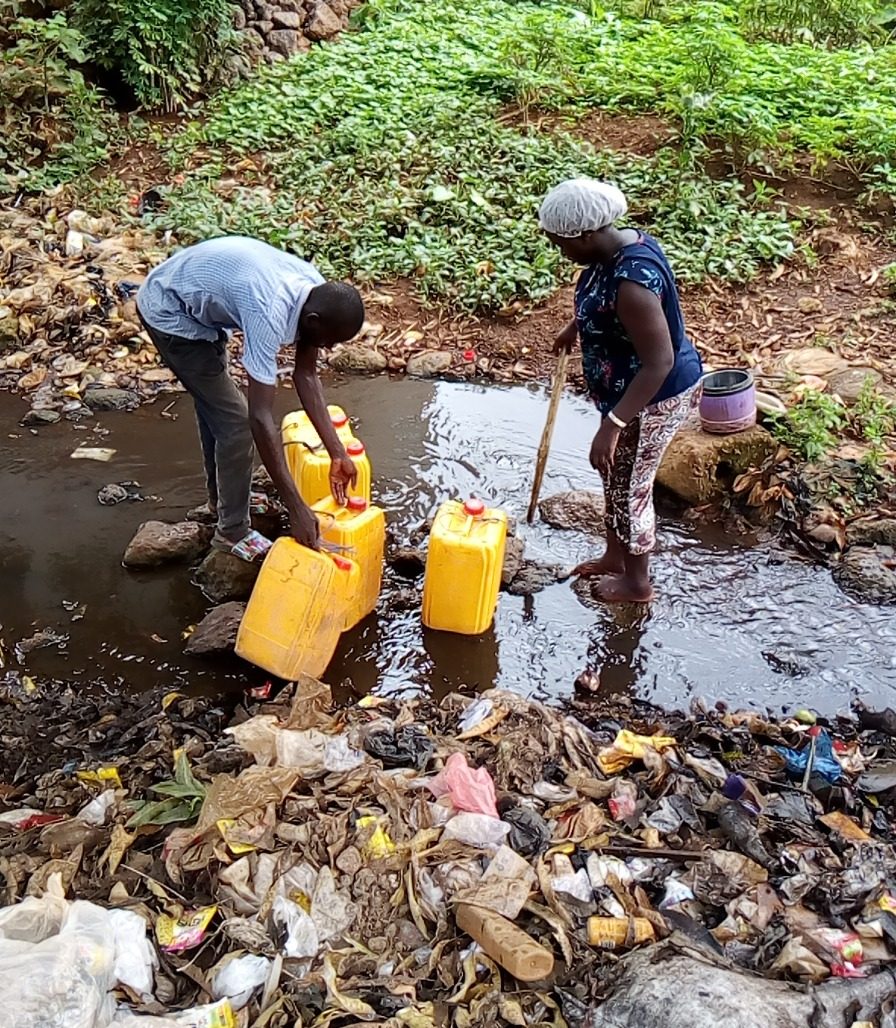 How do you mobilize for your strikes and how young people are involved in it but most of all, how does your government perceive climate activists in Sierra Leone?

Mobilizing the strikes is one of the most difficult things. Here in Africa 95% of the population doesn’t have any idea about climate change when they see you with placards standing on the road side striking they see you as someone who doesn’t have plans. The mindset is too narrow to the extent which I cannot explain. I use my

own pocket money to mobilize strikes, buy and design the striking materials we use. However since the launched of the movement there has been steady fast growth despite the covid-19 disruptions. We manage to grow a digital community of followers and also launched a digital channel for our digital campaign #youthvoice4climate.

We are working with over 2500 young people, 6 schools and 3 districts Of Freetown, Bo and Kenema currently due to the effort put in by our crew members make us Africa’s fastest growing Fridays For Future, together with a team of committed young people.

‘No sleep at night due to the heat’

The government of sierra Leone talk about climate change but no actions taken to combat it he doesn’t even pay attentions to climate activist in that regards I could say their actions are on papers only when it comes to reality they are deaf and blind about the fact currently the heat level is increasingly affecting us day by day no sleep at night and no stable electricity to power on air condition or even ordinary fan can’t power on at night that why I urges the government of sierra Leone to #face the climate emergency in sierra Leone and focus on climate change.

We have seen decades of violation of human rights in Sierra Leone. What do you think is the biggest issue related to climate justice?

Due to the political discrimination, tribalism, nepotism, poor planning, congestion especially in the capital of city Freetown and lack of community sensitization no enforcement of by laws by our government of sierra Leone massive deforestation soil mining and degradation stone mining they value money than life these are all the issues affecting us in our country that lead to climate change. Lawlessness is biggest challenge for us in here. 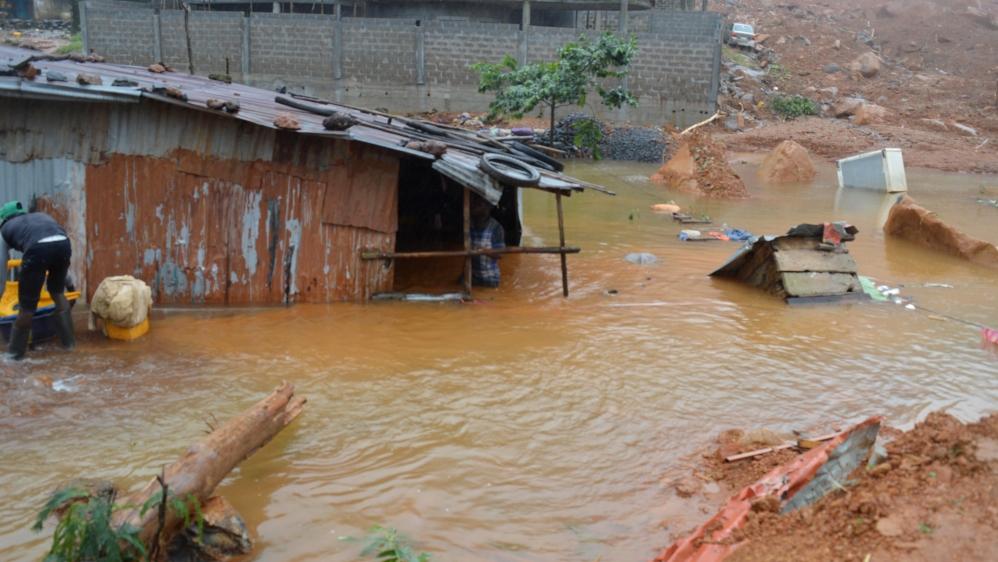 If you had a microphone on a world stage, what would you ask of the decision makers working on the issues of the climate crisis and climate justice?

I will ask decision makers to make climate action a priority. To take concrete steps to combat the climate crisis. We are tired of empty promises, we need urgent climate action. Make climate change priority in the national development plans. empower and financially support climate activists

Please tell us why you don’t want empty promises anymore since this is the theme of our 19 March strike.

Currently heat is killing us in Sierra Leone our climate breakdown is getting worse every second and our leaders are in their offices signing on white papers and given endless promises our future is at stake here our planet is under threat the people of sierra Leone are melting increasing temperature rise we are witnessing the disastrous effects of massive over extinction and subsequent degradation of nature on humanity and the planet.

The voices of environmental defenders, farmers, fishermen and indigenous communities, must especially be listened to, valued, and prioritize. We are not in for meaningless goals. #NOMOREEMPTYPROMISES.We are in for real actions.

2030 is nine years from now. We have less than this time to combat the climate crisis or else the effects will be irreversible. We will be headed for a mass extinction.

If our leaders take concrete steps to combat the climate crisis before the year 2030, the world will be a better place but if they keep making empty promises like they are doing, then the effects of climate change will be irreversible. 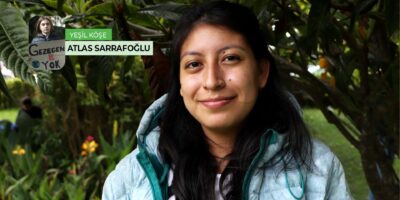