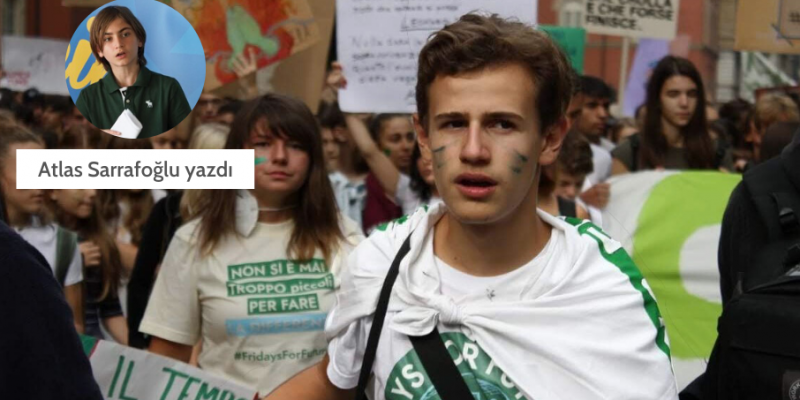 15 year old climate justice activist, David Wicker is a from the Susa Valley, in northern Italy and internationally with the purpose of asking governments all around the world to place the Climate Change issue as their top priority in their agendas and to start respecting the regulation of international agreements and treaties. David and I were both at SMILE last August for European activists meeting.

And finally I started to get scared. Scared because the warnings by climate scientists were so urging, while politicians seemed to be deaf.

Atlas Sarrafoğlu: Please tell us about your story. How did you first get involved? What inspired you to act?

David Wicker: I first started striking the first week of January in Turin. It was very strange. I knew what climate change was. I knew about it by “studying” it in school. I am putting braces on “studying”, because the way climate change is framed in school textbooks, it seems as it is already solved and that institutions are already taking care of it.

When I studied it, I didn’t think much of it. It was all summarized in only 2 pages of the geography book.

But then I saw Greta’s speech at the COP 24 in Katowich. I had wondered: “Why was the UN inviting a 15 year old to speak about something called climate emergency?”.

From that point forward, I started informing myself about what the climate emergency really was. I read the IPCC reports on the 1.5°C temperature rise, and watched documentaries from climate scientists and experts. And finally I started to get scared.

Scared because the warnings by climate scientists were so urging, while politicians seemed to be deaf.

Politicians and institutions were ignoring the biggest emergency humanity has ever faced, emergency which will have strong consequences on my future, and the future my children will live in.

So I had to do something. Anything. 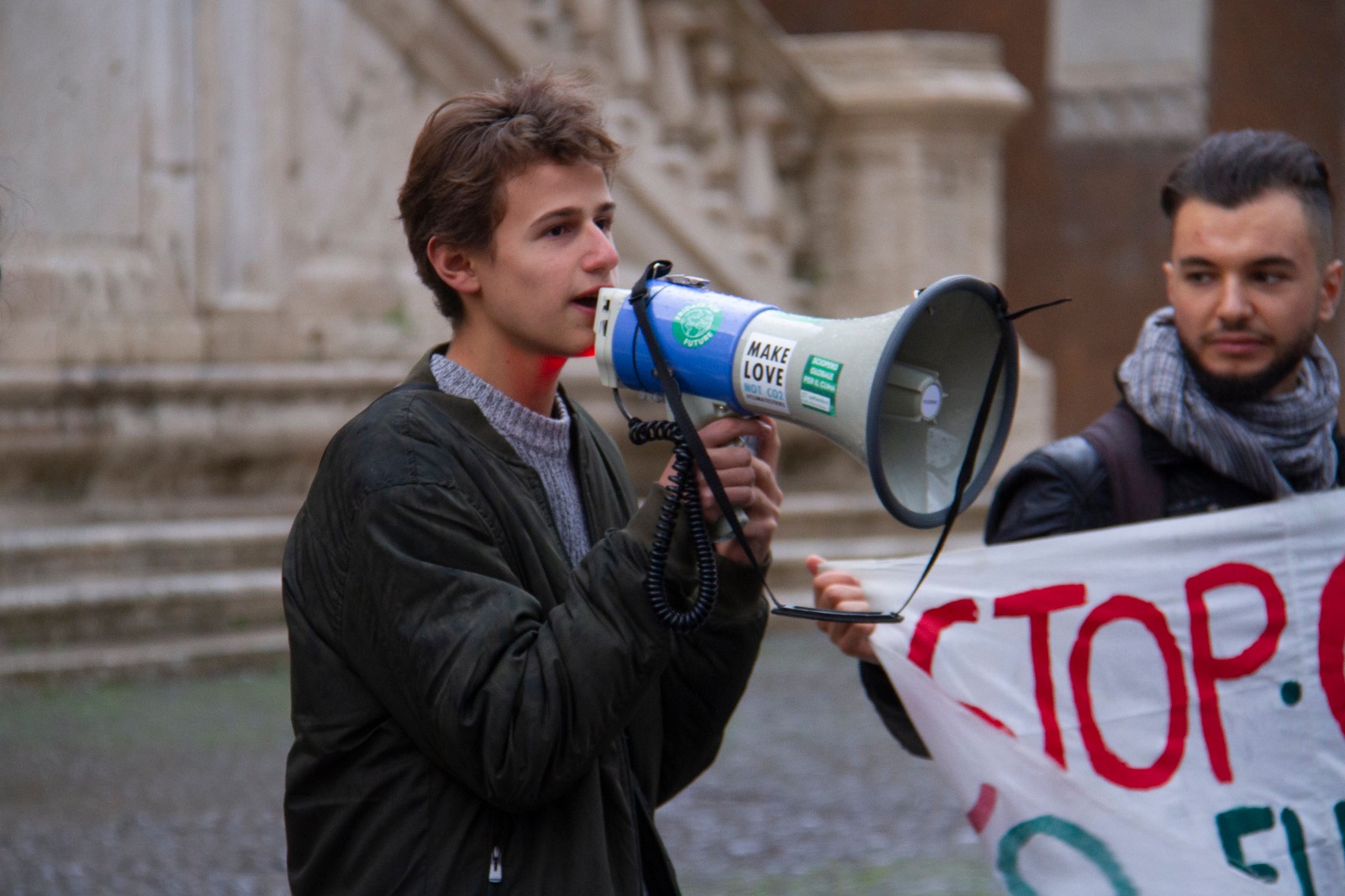 How do you see the climate movement changing in 2020?

This decade must be the decade of climate action, starting from this year, 2020. We have wasted so much time already, we cannot afford to lose any more days of inactivity. This year, the Fridays for Future movement is going to hold many actions around the world, starting from the next global strike.

We are not going to slow down, but we are going to be stronger and stronger. More and more.

‘We must put life ahead of profit’

We are going to put more and more pressure on institutions and on leaders to respect the Paris Agreement and to raise their ambitions for the upcoming COP 26.

In this COP in fact, nations will have to present their new ambitions on carbon emissions reductions, yet,  no nation has yet prepared this new ambitions, and the next COP is getting closer and closer.

Political parties must put aside their rush for political power and collaborate. We must put life ahead of profit.

For this we NEED a just transition, climate justice IS social justice. If we do not acknowledge this, we have already failed.  The necessary ecological transition MUST NOT be a burden on society, and must be paid by those who are the real culprits of the climate crisis.

A few months back, we read Italy introduced mandatory climate change lessons in schools. So what should be the next step forward?

It is true that the former minister of education announced the mandatory climate science lessons in Italy. Unfortunately though, after his resignation, it now seems the lessons will be organized by ENI (National Entity of Hydrocarbons) through a deal made with the ANP (National Association of Headmasters/School principals) which states that the school teachers will be taught by ENI on the topics regarding climate change.

In summary, Italy is allowing climate science to be taught in schools by climate killers.

‘The disappearance of the Alps glaciers is not too far’

What is the biggest challenge in global warming for your country specifically?

I live in northern Italy, thus I am concerned for the water crisis we will soon face, as well as incredibly high temperatures. The glaciers in the Alps have reduced by over 50% of their extension in the last 100 years, and over 70% of this 50% thawed ice, has been lost in the last 30 years. The disappearance of the Alps glaciers is not too far.

The reduction of glaciers expansion brings with it a major water crisis to northern Italy, as our main (and only) source of drinkable water are in fact the glaciers.

Also unusually high temperatures will have a strong impact on the entirety of Italy. Last summer many Italian cities reached temperatures of 45°C. This is extremely high for our countries, and is affecting many ecosystems, as well as the lives of the Italian citizens: In the Summer, many people have lost their lives due to the incredibly high heat wave.

What are your plans for the future?

The movement will keep on putting pressure on local, regional and national institutions to push them to stick to the Paris Agreement and to raise their ambitions of carbon emissions reduction in order to contrast the climate emergency.

We are going to keep striking every friday, and each friday we are going to speak about different aspects of the climate emergency.

The local group I organize in,  FFF Turin, is already starting to plan for the next european Fridays For Future summit, which will take place around the beginning of August. (dates not confirmed yet).

What do you like to do apart from activism?

I am in the second year of high school at the moment, and I am trying to learn as much as I can, both in school and in online university courses.

I consider myself a privileged kid. Thus I must not waste the opportunities I get, and work hard so that in the future I’ll be able to apply what I am learning to work on mitigating the climate emergency – by the time I’ll have finished  my study courses, it will be already too late to prevent the climate emergency, all that will be left to do will be to work on adaptation and mitigation.

In the little free time I have left, I enjoy playing the piano or coding on my laptop. When I travel (by train/bus) I like to bring my camera with me so that I can practice photography as well. 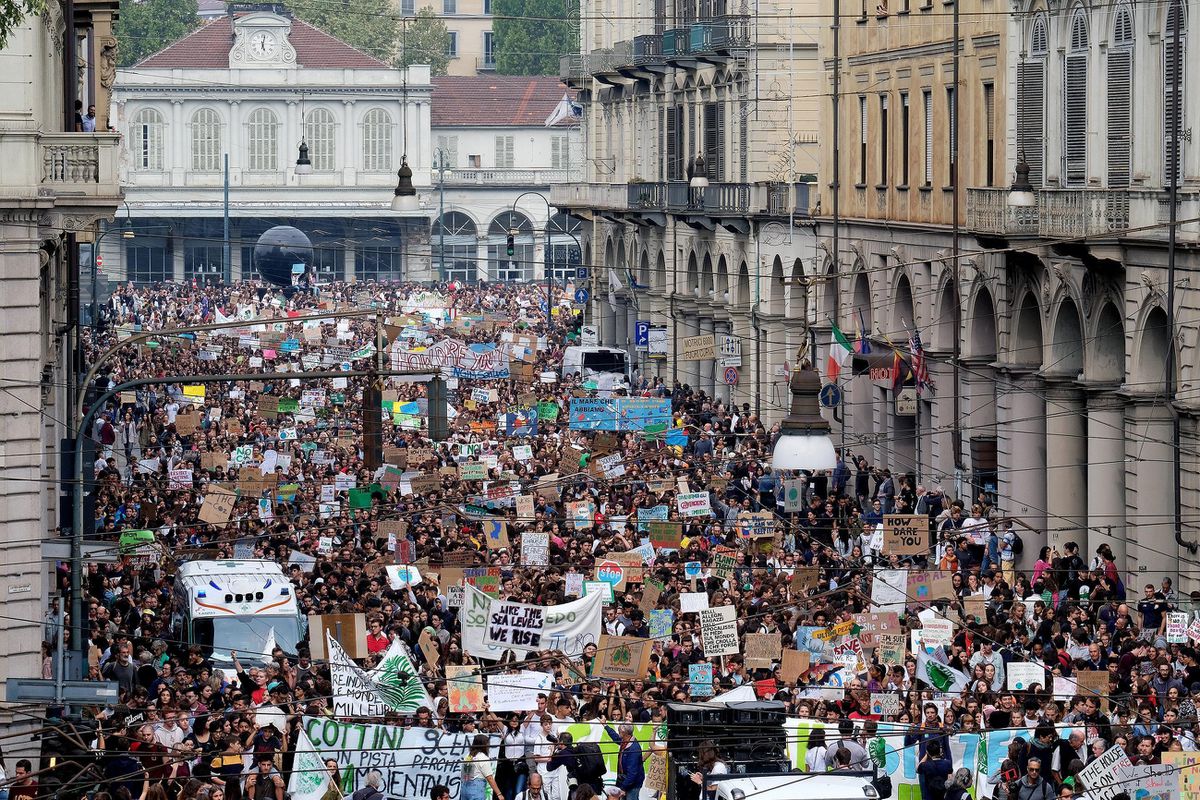 Tell us about the best experience that you’ve had through climate activism. What makes you keep going in these hard times?

There are a lot of incredible experiences I have lived within the movement. During the global strikes, seeing the oceans of people taking part in the demonstrations in Turin (over 100.000 people on the 27th September) brings back hope to me.

A moment I will never forget is the “occupation” of the European Parliament on the 25th May, just before the European Parliament. We bought tents, sleeping bags and we camped outside the doors of the parliament the night before the elections on the 26th May, to give a last push of pressure and awareness on the importance that those elections had in regards to the climate crisis.

We went through the night, singing all together, holding each other for warmth – it was very cold in the night – and hoping politicians would start acting on the emergency, soon.

If you had the attention of a room full of world leaders, what would you want to say to them?

I sometimes – more often than not – wonder why our “leaders” are not leading us through the climate emergency. How can they consider themselves leaders, if they are ignoring the most important emergency humanity has faced and, in some cases, even fueling it with corruption and subsidies!

It is time our “leaders” start acting as such and to take back their responsibilities into their own hands. The burden of the climate emergency cannot, must not, be left on the shoulders of the young (and future) generations.

*Respect the Paris Agreement and raise your emissions reduction ambitions (by a lot)! 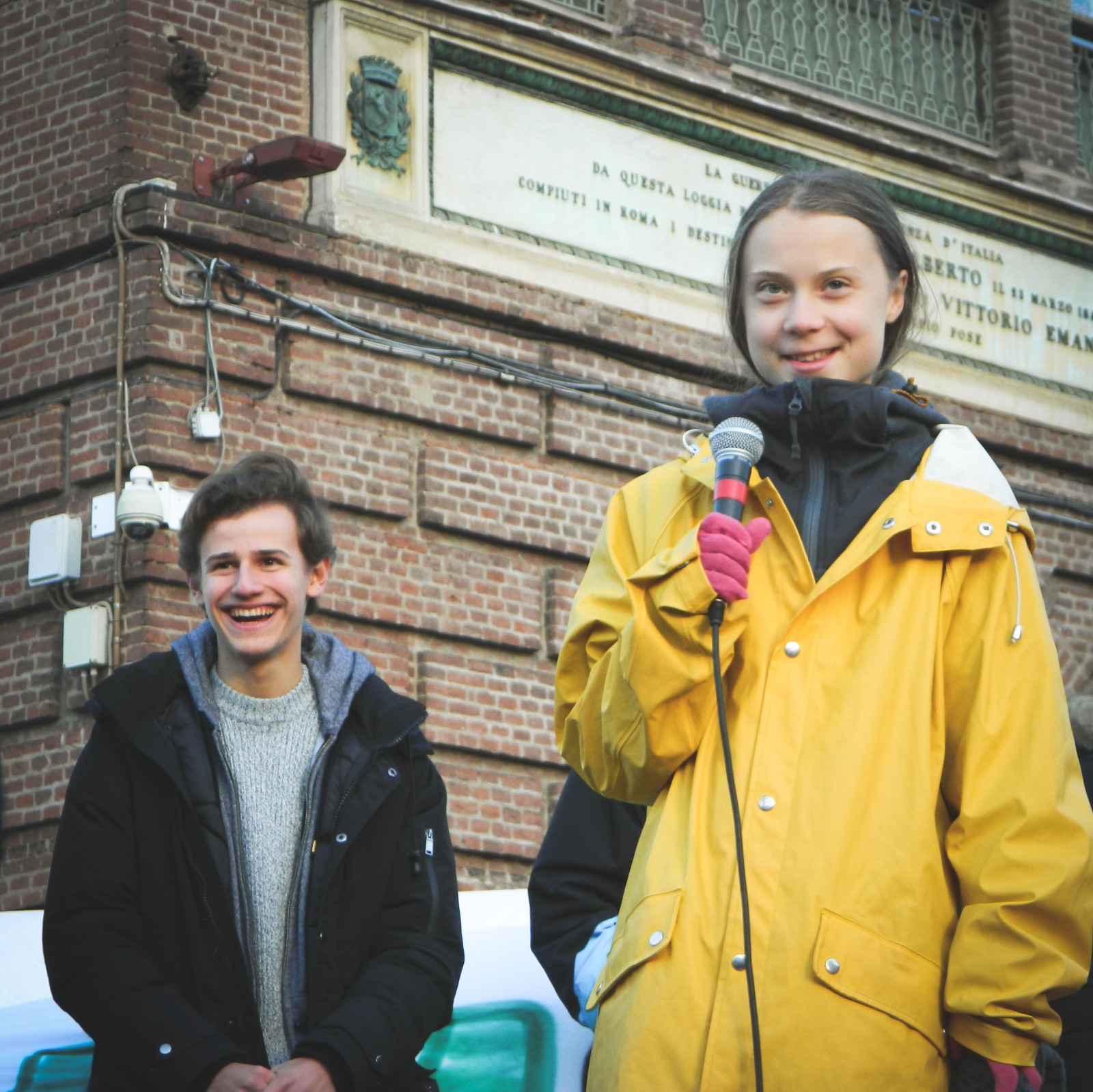 List the three people who have inspired you the most in the climate activist world and say a line or two about why that is.

Luisa Neubauer: She is the activist who started the strikes in Germany. I followed her work since the beginning and she alongside Greta, pushed me to start striking in Italy as well. Soon later I got to work with her. She is incredibly determined and is great at getting the message through!

Greta Thunberg: We all know her story by now, so I won’t bother. She inspired me to skip school for the first time in order to raise awareness on the climate crisis. I am inspired by her strength and by how she is able to pull through everything that is thrown at her. I am honored to have had the opportunity to work with her on multiple occasions.

Vanessa Nakate: I never had the chance to meet her yet, but I am awed by her determination in making sure African voices and point of views are heard.

African countries will be greatly impacted by the effects of the climate emergency, and it is not acceptable that the voices of the young activists living in these countries are ignored.

Italy has been one of the most crowded countries for climate strikes in 2019. What do you think sparked this?

The movement in Italy was born around the end of 2018. This gave us a lot of time to grow, and thus build up a solid community of climate activists all over the country.

There are many local Fridays For Future groups in Italy, and we make sure it is easy for everyone to start their own local group in their cities and connect with the rest of the movement. A list of all the groups can be found in https://fridaysforfutureitalia.it

We have had two national assemblies, which have helped us form a structure and think clearly about goals and strategy.

When we are planning a global strike, every local group works hard in spreading the voice about the demonstrations, and many, many local groups are able to organize their own marches. Often, some local groups work together in a joint march, to raise the number of people taking part.

We spread the voice of the strikes in the schools, making sure that students don’t join the strike only to skip school, but actually participate actively and consciously. 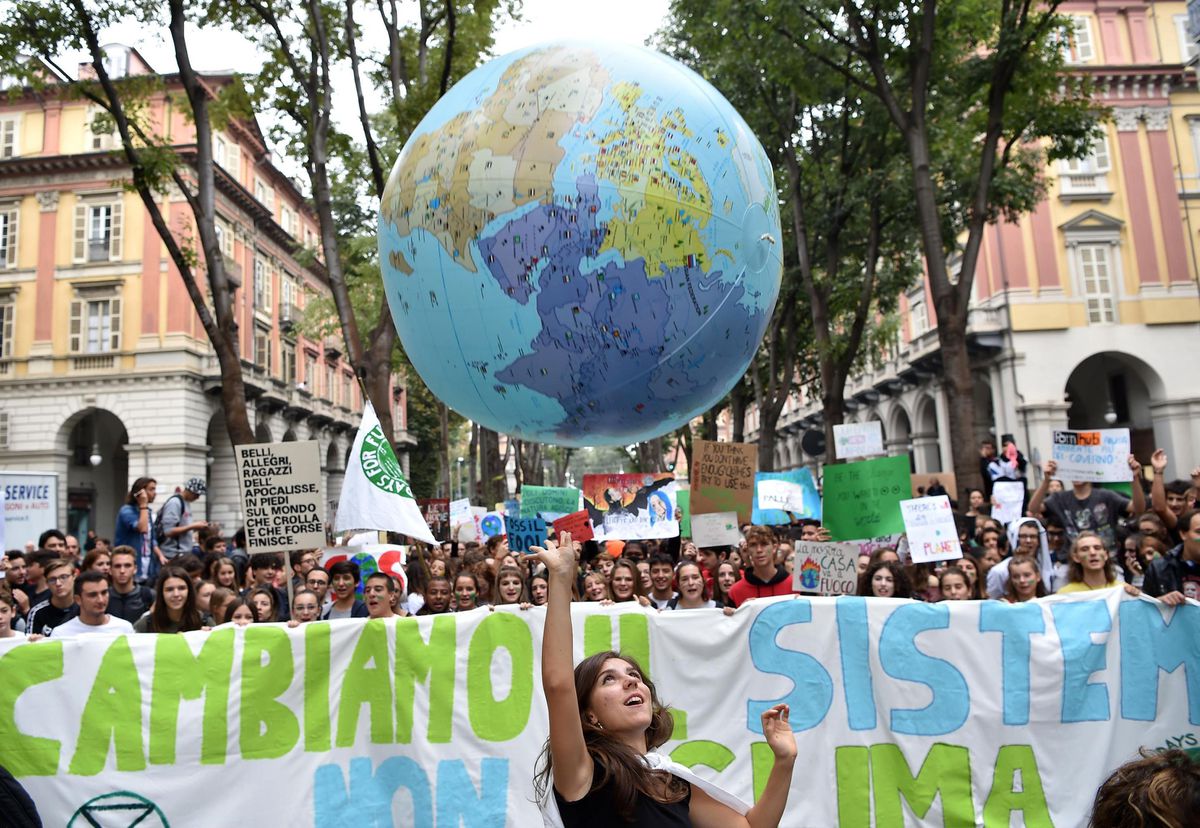 Do you have anything to say to young people in Turkey who want to start climate actions. How can people get involved in climate actions, what should they know before they start?

It is not hard to start acting on climate. The first step is to understand what the climate emergency is about, what are its causes and the consequences. It’s important to look out for reliable sources, such as the IPCC.

The second step, is to help raise awareness by talking about the climate emergency with friends, family, school camarades. You can try talking with your parents, and consider options to lower your own carbon footprint.

Finally, you can join the strikes, and help put pressure on institutions.